Once, James P spent his time obsessively watching a single scene in Disney’s Bambi cartoon. Then, things became so difficult that James had to leave the family home in Bangor and move to Muckamore Abbey Hospital in Antrim.

Today, he lives at our Windermere Supported Living Service in Lisburn and his life has been transformed.

Nowadays, James does his own laundry, empties and fills the dishwasher, makes his own bed and brushes the floors. At mealtimes, he also enjoys chopping vegetables, setting and clearing the table.

Jolene Welsh, Service Manager, says: “It is important to James that he makes his own decisions about what to do with his time. He particularly enjoys watching videos and DVDs. Every weekend, he looks forward to going to buy a new DVD and then treats himself to a McDonalds. This is a particularly significant treat for James, because he has been working hard to lose weight. He has put us all to shame with his determination to choose healthier food and to take a walk every day.”

The transformation in James’s life was not easy, but his story shows that with attention and perseverance, almost anything is possible.

At first, James found it difficult to adjust to new people and a new home. He was stressed for much of the time. But gradually he began to adjust, learning to trust his core team of support staff. He has built strong relationships with those supporting him and enjoys nothing more than sharing a joke.

James has learned to be patient and understands that staff are there to help him. This is something that would have been almost impossible to imagine in the early days.

Jolene adds: “A really exciting event for James was to attend his twin brother’s wedding. It was fantastic that he could share this day with his family. A lot of preparation went into the event. James was gradually introduced to the venue and, using pictures and photographs, we familiarised him with all that would happen on the day. He also went shopping for a new suit. James coped amazingly well with all the excitement and activities on the day.

“James has recently completed Planning Live sessions, which help to put James right at the centre of his own support, and we all have high hopes for his future.”

James’s father Ronnie says: “I have to admit that when there was talk of moving him out of Muckamore, I wasn’t sure if I agreed. When he was there, it gave us a little peace of mind knowing he was safe. But we could see that very little was improving in his life.

“These days, he’s much more content. He’s more patient. And he can express his choices and adapt much better to change.

“They’re constantly looking ahead to help him become more independent and they’re encouraging him to do more for himself.

“Since he’s been supported by Positive Futures, it’s made an enormous difference to us and to him. He’s so settled and we’re much more relaxed, knowing he’s in such good hands.” 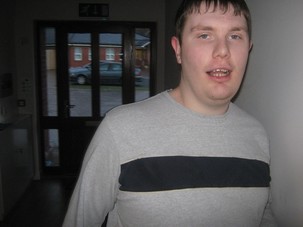