Love And Laughter As Rachel Celebrates The Big 4–0

Rachel, who’s supported by our Mid Ulster Supported Living Service, didn’t do things by halves when it came to celebrating her 40th birthday.

As well as having a meal out with her family at Cookstown’s Royal Hotel, she organised a party for her friends and Positive Futures staff at the house she shares in Dungannon with her housemates Teresa and Clare.
Invitations went out at the beginning of August. Then Rachel, with the help of support staff, got down to making the arrangements. She chose food, the birthday cake and decorations. As the big day approached, her support team helped her decorate the house.

On the day itself, there was lots of laughter, conversation, singing and dancing, culminating in the lighting of the candles on the birthday cake as all the guests sang ‘Happy Birthday’.

Rachel received lots of cards and presents. Among her favourites were a jigsaw and a picture frame.

For Rachel, one of the highlights was seeing Positive Futures staff member Lisa, who had been off for a while with an illness but was able to attend the party.

Rachel’s ambition, now she has reached 40, is to become increasingly independent. 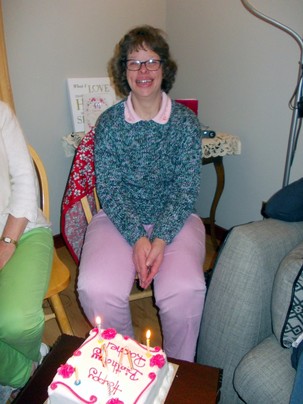