An interview with a 92–year–old carer supported by Positive Futures has helped propel a BBC programme into the shortlist for a prestigious radio award.

Jenni Hull, whose son Martin has Down’s Syndrome and dementia, featured in Linda McAuley’s “On Your Behalf” show on Radio Ulster. Now the segment, entitled “Caring for the Carers,” which also included Agnes Lunny, Chief Executive of Positive Futures, is on the shortlist for the IMRO Radio Awards, to be presented in Kilkenny on 6 October. It is one of the biggest nights of the year for the radio industry on the island of Ireland.
Linda’s programme and BBC Northern Ireland have already been the recipients of our Welcome Award for helping to raise awareness of carers’ issues and for providing a welcoming atmosphere for the people we support.

The BBC Newsline programme picked up on the interview with Jenni and a subsequent TV report was viewed by 1.7m people on Facebook.

Agnes Lunny said: “We wish Linda and BBC Northern Ireland every success in the IMRO Awards with this well–deserved nomination. The broadcast featuring Jenni has brought the issues faced by carers to a huge audience and we look forward to working with the BBC in future to highlight this important but often neglected subject.” 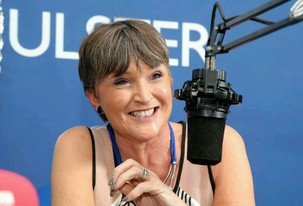