Michael’s support was just the ticket

Michael volunteered for a year with our Better Together Project and transformed the life of Thomas, an adult with a learning disability who had been identified as “hard to reach.”

While all the Better Together volunteers do remarkable work, Michael went the extra mile – literally. He bought himself a bike and took up cycling so that he and Thomas could explore areas like Cave Hill and the Lagan Tow Path. He also signed up as a Positive Futures driver to give Thomas the opportunity to go further afield, on fishing trips to Donaghadee and go–karting in Bangor.

When Thomas joined Better Together, he was very nervous about using public transport, to such an extent that he avoided travelling by bus. Michael supported him to overcome his fear. He is now able to travel by bus on his own and feels much more confident.
Michael also supported Thomas with his budgeting skills, encouraging him to manage his money and keep track of his spending.

Michael’s warm, kind and caring personality, together with his 100% reliability and willingness to go beyond what was required, led to his nomination as Volunteer of the Year in the Better Together Project.

If you think you have what it takes to be a volunteer, check out the volunteering section of this website or call our Volunteer Co–ordinator, Ruth Mormecha, on 028 9260 6740. 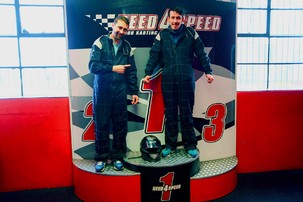