Unpaid carers save the Health Service in Northern Ireland four and a half billion pounds a year – but many of them are socially isolated, worried about the future and largely ignored by society.

That was the message from our event at Stormont hosted by Jo–Anne Dobson MLA yesterday.

Our Chief Executive, Agnes Lunny, said: “There are carers across Northern Ireland in their 80s and 90s who are fearful about what will happen to their adult children when they die. With the help of Big Lottery, we have been able to support 90 families with older carers in the Bangor and Lisburn areas. But we know there are many more who have to struggle on alone. Some of those we’re supporting in our Better Futures project have told us that until we came along, they hoped their children would die before they did. We’ve been able to offer advice and support them to make arrangements to give them peace of mind.”

Jo–Anne Dobson said: “It’s crucially important as a society that we care for those who care for others. That’s why this event and the work of the charity Positive Futures through the Better Futures project are so important.

“As we look to the future care of our most vulnerable in Northern Ireland it’s staggering to think of the sheer number of older carers. Their selfless contribution to the care of those they love must to be properly recognised and supported.”

The event, in the Long Gallery, Parliament Buildings, heard from carers about their own experiences. Our President, Alan Kendall, made presentations to older carers in recognition of their selfless dedication in supporting their loved ones.

Agnes Lunny said: “Carers are twice as likely as anyone else to suffer from poor health. Carers who are unsupported have lower incomes and often face social isolation. They are not asking for special treatment – just a little support and recognition that they do a hugely important job in society. We would like to see the Care Act extended to Northern Ireland for the 214,000 carers in Northern Ireland, to ensure that they are not ignored and left to fend for themselves.” 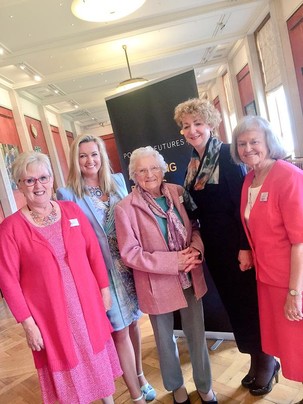