Animal madness took over our East Coast Supported Living Service last week. Thanks to the money raised from a charity netball tournament for both men and women in January, the people supported by the Service were able to enjoy unique sensory experiences hosted by Party Animals NI. The events took place over two weeks, with four different experiences, some taking place in the homes of the people we support. The people we support were delighted to get up close with everything from snakes and stick insects to giant African millipedes and bearded dragons. There were cuddly chinchillas and ginger guinea pigs but the biggest hit was definitely the meerkats!

Helen McLaughlin, Service Manager, said: “I want to give a huge thank you to David and Rachel from Party Animals NI who facilitated this fabulous opportunity. We had such an enjoyable time – it’s great to take time out and do something a little bit different. I also want to thank everyone who participated in the netball tournament back in January – without their contribution, this fun day wouldn’t have been possible.”

The Service was so impressed with Party Animals NI that they have nominated them for our “What About Me?” Welcome Award. David and Rachel were sensitive to the needs of the people we support and tailored the experience for each person. Everyone loved finding out all the interesting facts about the different animals which was so easy to listen to thanks to David and Rachel’s great communication skills. 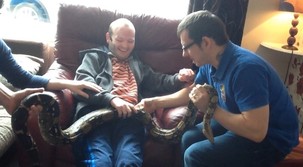 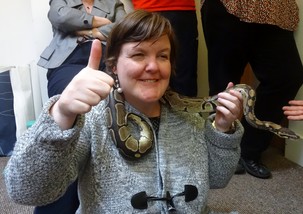