Unforgettable… That’s What You Are Keiron

Last week we said goodbye to a very dear friend, Keiron Aitken. Staff in Positive Futures first met Keiron as a child, aged 7 years old, and he had been with us since our inception in 1995. Keiron lost his battle with cancer on 22 January with his mother Geraldine at his bedside.

Keiron’s brother, Pete, shared this poem at his funeral which he had written about the man we cared for so deeply.

So,
Here he comes, the big lad,
Shoulders swing and
Fairly swagger.
“Penguin” bound for Ulster frys,
Bowling down
The streets of Bangor.

You may have seen him coming,
With that sideways tuft of hair.
An arm packed full of DVDs
To barter, sell and share.

‘So what about yer, Big Lad?’
The faces stop and say.
‘Fine… I’m Fine’
He’d crack the widest grin,
Then quickly make his way.
Walking tall with home grown courage
In a world that can be cruel,
Through a pack of teenage bullies
And the ignorance of fools.

Because it’s hardest being different
When your feelings are the same.
When folk mis–read your meaning
Although your words are plain.

His words defined precision,
Never wasted,
Mainly True.
And I never heard him tell someone
What HE thought
That they should do.

Never saw him live by Judgement,
Never saw him hate a man,
Never heard him blaming other folk
Because no–one understands.

Independent with a passion
clearly known, without a noise.
A saint amongst the ladies
and a boy among the boys.

The Mountain and the Mogli,
The massive and the wee.
A gentle giant’s tender touch,
and a little doggie’s glee.

I’ll miss the rippling giggle,
As it trickles through the room.
An honest humour found in farts
That makes a belly boom.

Every tiny simple instant
Held once and then passed on,
And a big lad, who saw trouble
when things don’t move along.

Better not tomorrow,
Nor yesterday hold dear,
For right here in this moment
There’s a great deal less to fear.

So…
Keep it simple,
Keep on smiling,
Tell yourself
To just be me.
And please
try hard not to worry
because,
There’s always great TV.

Let’s now leave this empty armchair
And a screen now turned to grey,
but please,
don’t touch the remote control
just coz
The Big Lad’s gone away.

Sleep tight Keiron. Your friends in Positive Futures will always think of you and smile. Dearly loved and remembered forever.

Keiron, at a younger age, in his scout uniform

Keiron, back middle, with all his friends from the East Coast Supported Living Service who he grew up with and loved so dearly 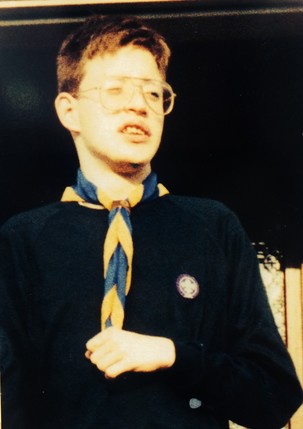 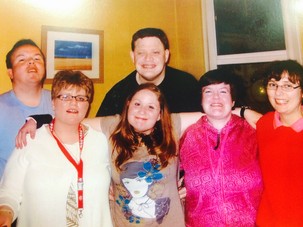