Staff and people supported by our East Coast Supported Living Service kicked off 2015 by taking part in a mixed netball tournament. The tournament, which was jointly organised by the Service and Holywood Netball Club, was a huge success with over 40 participants. And it wasn’t only the ladies showing off their skills – there were lots of enthusiastic and talented men too!

The mixed teams battled all day with our very own Positive Futures team taking the winning trophy, although we’re not sure if it was the Positive Futures staff on this team or the talented ladies from Holywood Netball Club who secured the win! Gary, John and Jackie, all of whom are supported by the Service, were on hand to keep score and rescue runaway balls.

A great day was had by all but most importantly the event raised an amazing £330! The money will go towards a discrete piece of work in the Service. We’d like to thank all those people who were involved in the organisation of the event and those who participated and made it as much fun as it was! We’d also like to say a big thank you to the Co–op, Bangor Main Street store, who very generously donated bottled water and sweets to the tournament. 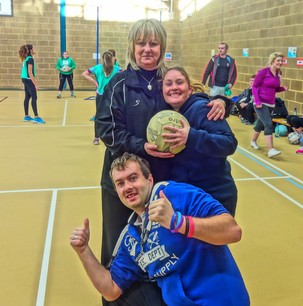