Sticking Together To Stay Safe

Our Better Together Project recently hosted a celebration event to mark the end of our Stay Safe programme which was attended by young adults supported by the Project and funded by the District Policing and Community Safety Partnership. The Antrim Road Neighbourhood Policing Team facilitated 5 sessions with the young adults to develop their understanding of the role of the police and increase their awareness of risk behaviours and strategies to reduce their vulnerability to becoming victims or perpetrators of criminal activity. A key success driver of the programme was to increase the participants’ trust in the PSNI and develop an understanding of the support they can offer.

Sam, who has been involved in the Better Together Project since July 2013, attended the workshops having had several negative experiences with the PSNI in the past. Sam told us, “I don’t know many people who had experiences like mine with the police who would’ve gone to something like this, but I put it behind me and gave it a go.”

At the beginning, Sam openly talked about his dislike of the police, saying how he had been present at several riots. With the support and encouragement of Better Together staff, Sam continued to attend the workshops. As time went on, his attitudes began to soften and his input became increasingly positive. He took part in role–plays as well as discussions on how to be safer and avoid situations such as bullying and theft. He revelled in the opportunity to try on the uniforms, sit in the driver’s seat of the police Land Rover and pose for photos with members of the PSNI.

Speaking at the celebration event, our Chief Executive Agnes Lunny said, “It is fantastic to see how far these young men and women have come in such a short time and to see how their views on the PSNI have evolved. The programme has provided a great learning opportunity for those involved and we are grateful to the police officers who facilitated the sessions. We hope that this can be a springboard to further events of this nature across Northern Ireland.”

Picture 2 – Sam getting into character in PSNI uniform 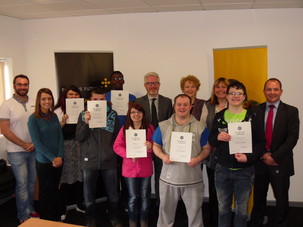 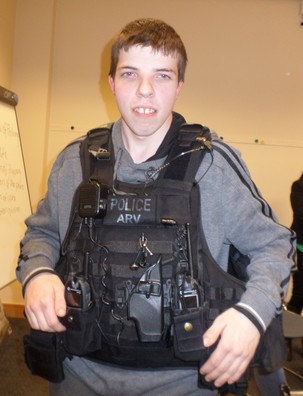