Lord Mayor Lends His Support To Our Campaign

Belfast’s Lord Mayor Mairtin O’Mulleoir has lent his support to our “What About Me?” campaign as he hosted a reception to hear the story of 23 year–old Georgina Brodrick, who has a learning disability and has suffered a series of strokes resulting in limited function down the right side of her body.

Georgina was not allowed to enrol on a course at college because of her disability and is often forced to use the stairs in the building when the lift is not working. She tires easily and feels overwhelmed when trying to climb the stairs among large numbers of people.

The “What About Me?” campaign aims to raise awareness of the obstacles society places in the way of people with a learning disability, acquired brain injury or autistic spectrum condition.

Georgina said: “I’ve had to deal with many challenges, including having to learn how to write with my left hand and using a wheelchair when I’m too tired to walk. It annoys me when people stare. Young people ask me about my disability, but older people just stare.” 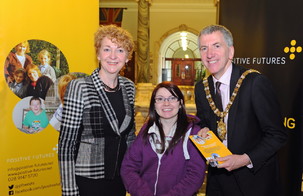